I had never made a pecan pie because I had heard so many horror stories that they never turned out right, so I never took a chance. This Thanksgiving I decided to make a Pumpkin Pecan Pie and it turned out fantastic. It came out of the oven beautifully with no problems.

Because the first and only pumpkin pecan pie went so fast I decided to make another one just for my family eating left over’s with us on Friday. There was more to go around that way.

I decided to make it with Swerve Sweetener instead of sugar because my Mom and Aunt are both diabetic and trying to keep themselves under control. They avoided all the pies on Thursday and I have no doubt they hated every minute of that. I didn’t say anything to anyone, except my Mom and Aunt, about the switch from Sugar to Swerve. I wanted to see if anyone said anything. Everyone else had the real deal with sugar the day before. Would they notice a change? 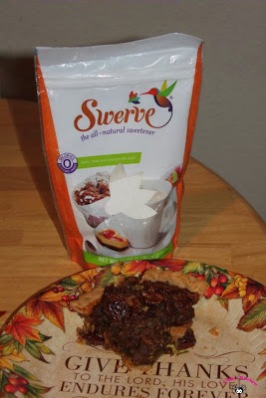 My Mom must have asked me 100+ times if I was sure I didn’t use sugar because the pie looked just the same, didn’t have a weird after taste, and she LOVED it. No one even questioned the change. They gobbled it up just the same way they did the day before. Before everyone left today I asked them if they could tell a difference in the two pies. Everyone looked shocked. All I heard with It was fantastic … when are you making it again? Christmas? Ha!

In the end my pies turned out beautifully. Not only did they come out beautifully they both tasted wonderful with the Swerve and with the sugar. I wasn’t sure what to expect but the two different pie flavors actually mingle together nicely.

Making a pumpkin pecan pie was like getting two different pies but only having to do the work of one. I only made one the first day which was a big mistake. I should have made two… at least. It was gone FAST! I can’t wait to make another one. It was incredible, easy, and made with Swerve Sweetener instead of sugar the second day!! One cup of sugar is 773 calories! That’s a huge calorie difference. That is saving eat person almost 100 calories a slice and they didn’t even know it!

Hi thank you for stopping by. I am very excited to have you here. Pull up a chair and have a seat, this is the view from my side of the table. View all posts by Nicole

This site uses Akismet to reduce spam. Learn how your comment data is processed.

Being brave doesn't mean that you are not scared. Being brave simply means that you know there is something better out there, but you have to be brave to do it.

Pull up a chair and have a seat. This is the view from my side of the table!

Welcome to My World of Losing and Gaining Weight, Living Life, and Finding My Own Happiness

A daily selection of the best content published on WordPress, collected for you by humans who love to read.

Pull up a chair and have a seat. This is the view from my side of the table!

The best longform stories on the web

The latest news on WordPress.com and the WordPress community.